M&A volumes in UK back to pre-pandemic levels

Last month, BDO released the latest edition of its Private Company Price Index Report (PCPI), giving an important overview of the state of M&A activity in the UK in the first quarter of this year. The key takeaway from this PCPI report is the return of UK deal volumes to pre-pandemic levels, following several quarters of busier dealmaking.

BDO commented that M&A data showed that “the ‘new normal’ is looking very much like the ‘old normal’”. However, within the headline figures, there are more complex stories and factors at play and it’s worth delving into how dealmaking is shaping up.

In terms of valuations, acquisitions completed by trade buyers in the first quarter (tracked through the PCPI) had average multiples of 10.7x. Private equity acquisitions, meanwhile, (tracked through the Private Equity Price Index, or PEPI, which is also included in the PCPI report) had average multiples of 11.8x. In both cases, these figures represented slight declines from the previous quarter. 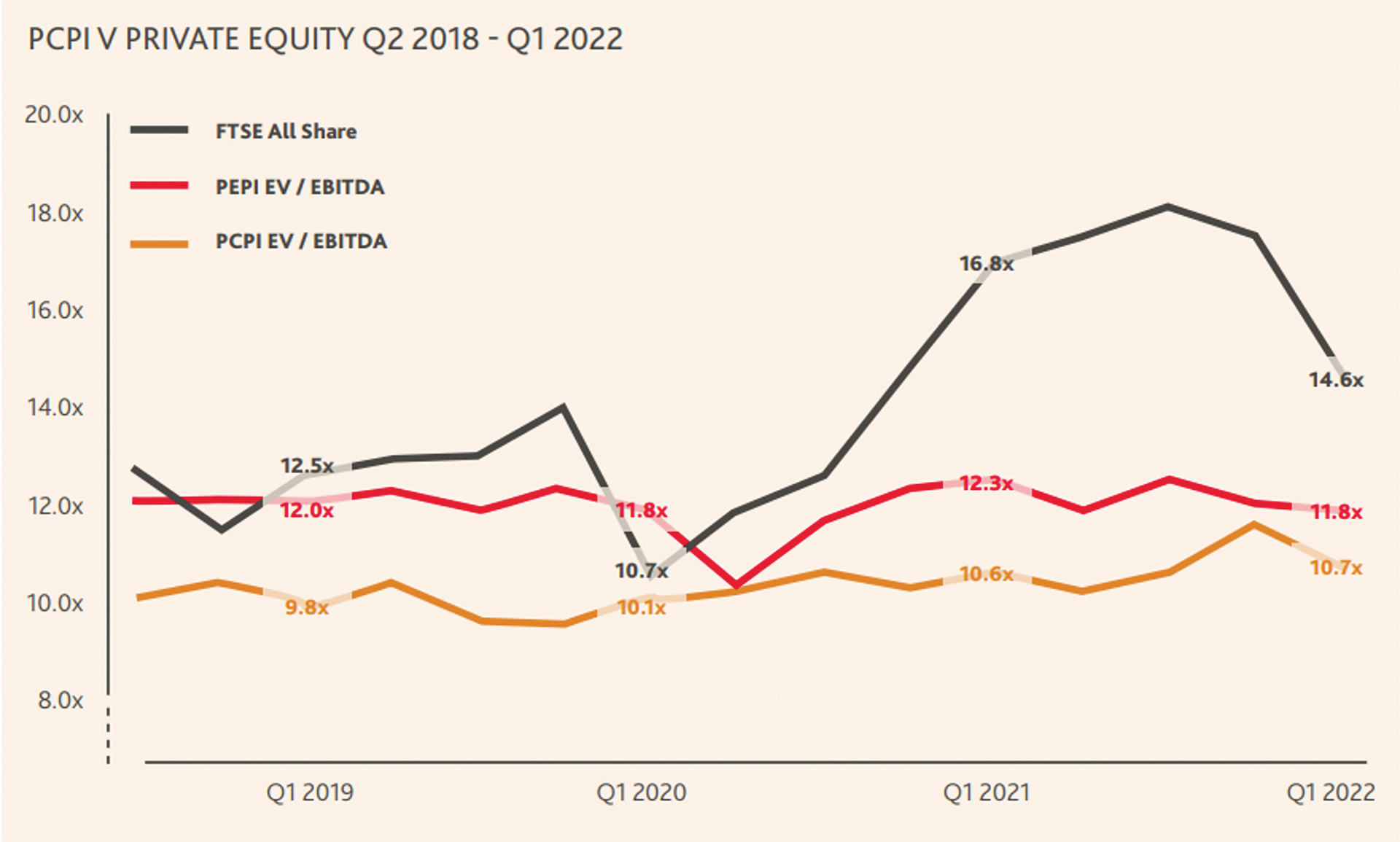 What is the PCPI?
BDO’s PCPI and PEPI collect and analyse data regarding Enterprise Value (EV) and Earnings Before Interest Tax, Depreciation and Amortisation (EBITDA) multiples in M&A transactions. The index tracks the EV and EBITDA multiples that trade and private equity buyers pay in acquisitions of private UK companies.

Once this data is collected, it is then examined and compared with data from historic indexes, enabling the report to identify, highlight and analyse key trends in the M&A market, as well as potential future trends that could affect M&A across a range of sectors.

The PCPI represents the average deal value of EV and EBITDA multiples in acquisitions of private UK companies by trade buyers which have a mean deal size of around £13 million and a median size of around £12 million. The PEPI, meanwhile, tracks private company acquisitions by private equity buyers in which there is a mean deal size of £37 million and a median size of £20 million. As a result, the multiples will not apply for smaller company acquisitions.

Interestingly, the number of deals done in the first quarter of this year matches the average for deals completed in 2019 – the last full year before M&A was disrupted by the COVID-19 pandemic. The early data from this year also potentially illustrates a natural slowdown from the strong recovery seen last year.


BDO LLP M&A Partner Roger Buckley said: “It is not surprising to see a simmering down in volumes following the catch-up activity that took place last year. So far, indications are that the ‘new normal’ is looking very much like the old normal, despite considerable uncertainties across the economic and geo-political spectrum.”


Buckley added: “It is notable that March saw activity levels step up despite the invasion of Ukraine. UK business leaders have proven highly resilient and have cash to spend, meaning the outlook for M&A remains strong.”

Following a slow start to 2022 (perhaps attributable to lingering concerns regarding the Omicron variant), March recorded the quarter’s strongest deal volume, with the 192 deals tracked in March representing 33.51 per cent of all those in the quarter. Furthermore, Q1 2022 actually showed an increase in private equity activity compared to the previous quarter.

The PCPI recorded a marginal increase of 6.3 per cent in private equity deals, with 85 completed in Q1 2022, compared to 80 in Q4 2021. The overall decrease that Q1 2022 saw in comparison to the previous quarter being attributable to a 20 per cent decline in activity by trade buyers, with just 488 deals completed in the first quarter of this year, compared to 609 in Q4 2021.

How does the latest report compare to recent quarters?
In returning to levels last seen in 2019, the PCPI for Q1 2022 represents something of a normalisation of M&A activity after two years impacted by the COVID-19 pandemic, which has alternately stifled and encouraged dealmaking.

During the initial stages of the pandemic, M&A activity in the UK was severely hampered by lockdowns and the overall disruption caused by COVID-19, with just 250 trade and private equity deals completed in Q2 2020, compared to 582 in the previous quarter and 581 in the corresponding quarter in 2019.

Activity recovered during Q3 2020, which recorded a much-improved 408 deals, before months of pent-up demand was fully unleashed during Q4 2020 and Q1 2021, which saw 717 and 776 deals, respectively. From these heights, a slow down was to be expected during 2021 (although deal volumes did by and large remain significantly above the levels seen prior to the pandemic) and this has seemingly accelerated further in Q1 2022.

In comparison to volumes, deal values for private company acquisitions by trade buyers have remained largely steady since the onset of the pandemic and had largely recorded gradual increases, with Q4 2021’s average multiple of 11.4x the highest recorded by BDO in well over two years.

Overall, the trajectory of multiples for trade acquisitions of private companies shows that valuations have largely remained solid in spite of the pandemic, even remaining steady at 10.1x in Q2 2020, when the initial wave of COVID-19 was at its peak.

After this slump, private equity deal valuations recovered strongly, bouncing back to 11.6 in Q3 before outstripping their pre-pandemic levels to hit 12.2 in Q4 2020 and 12.3 in Q1 2021 and remaining relatively stable throughout 2021.

What is the view going forward?
While it may seem that dealmaking has seen a significant slowdown at the start of 2022 (in terms of both volumes and valuations for trade and private equity acquisitions), the figures are by no means as negative as they may appear.

A slowdown in deal volumes was perhaps to be expected given the huge figures recorded in late 2020 and virtually all the way through 2021. This surge in dealmaking most likely represented the fulfilment of pent-up demand post-lockdown (indeed, 2021’s dealmaking volumes were described as “catch-up activity” by BDO’s Roger Buckley).

In fact, there are many positives to be taken from the latest figures for dealmakers. For one, the fact that deal volumes and valuations seemingly haven’t taken as much of a hit as might be expected from the uncertainty currently impacting the market. As pointed out by Roger Buckley, Q1 2022 has been marked by “considerable uncertainties across the economic and geo-political spectrum”.

These factors range from, but are by no means limited to, the invasion of Ukraine (as well as its protracted build-up throughout Q1), rapidly rising prices for everything from labour to energy and severe ongoing supply chain disruption. In the face of this, a return to pre-pandemic deal volumes and valuations can, if anything, be seen as a reflection of the strength of the UK M&A market.

Looking forward, there are reasons to be optimistic about the future prospects of both deal volumes and valuations. As noted by BDO, deal volumes recovered strongly towards the end of Q1 2022, with March recording the most deals for the quarter, and this looks set to continue, with Roger Buckley pointing out that UK business owners “have cash to spend”.

Another factor that should boost deal volumes, although not valuations, is the rapidly rising level of business distress in the UK. Across the UK, companies are contending with the end of COVID-19-related support schemes and protection from insolvencies, the need to repay government-back emergency pandemic loans, soaring inflation and the lingering overall impact of the pandemic on markets such as retail. As always, escalating insolvencies will mean that there are a huge number of deals to be done for buyers targeting distressed acquisitions.

Away from the distressed side of the market, a wider range of buyers will be looking to accelerate their acquisition strategies in 2022 and this should bode well for valuations. Faced with the need to adapt to challenges such as supply chain pressures, digital transformation and growing ESG requirements, many companies will look to acquisitions to help add these capabilities. This, in turn, will make the businesses that they look to target hot property, pushing valuations up accordingly.

Finally, 2022 will also seek private equity firms continuing to deploy the capital that they accrued during the pandemic across a wide array of sectors, something that should also help to strengthen valuations considerably during 2022.

YE21 turnover of £666k. A well-established sportswear brand specialising in water sport clothing. Operating over 10 years, establishing a prominent brand and building up a strong rapport with multiple clients and wholesalers.

Specialises in providing high-quality, comprehensive electrical installation and support services and has maintained an excellent reputation for its technical expertise and dedication to complete client satisfaction. Works with circa 300 clients pres...

Seafood M&A - a look at what is behind the surge